I've been looking around today and thinking about taking the decorations down but not quite got to it as I know it will look dark without the lights from the tree and village. I usually do this New Years day so I think I will wait until then.  Also need to store again the little gift bags and bits that are ok in the top of my wardrobe as I always re-use the bags and bows if I can.  I also have some coloured envelopes which just have our names written on which can be used for card making or making your own gift bows, I did one earlier and it turned out ok here it is.. 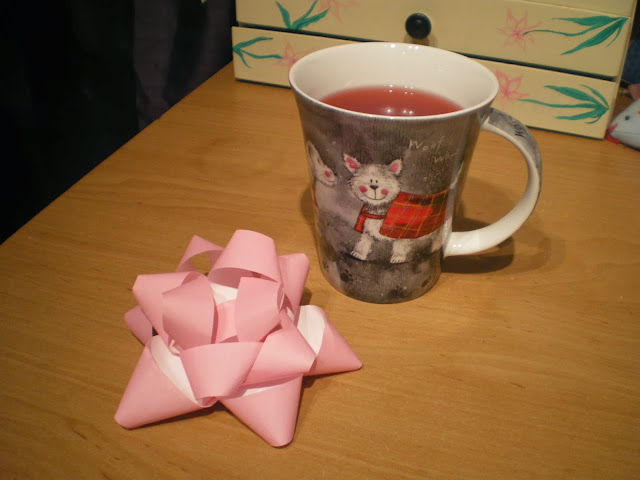 As you can  see it is quite a decent size, I put it beside my cuppa so you can get a good idea but you could make different sizes and its a good way to use up odd bit of paper. I got the instructions from another blog here but it was basically cut three strips of paper 27cm, three at 24cm then one at 5cm.  You just twist them into a figure eight shape and glue, then layer them up, just loop the last one.  I stitched through  the middle of the pile of mine to make it secure. it was very quick and you could do them multicoloured or out of fabric.  Thank you Thrifty Magpie for that idea.
I've started my resolutions already as I never see the need to wait for new year to make positive changes, had a good walk with my dogs and started this weeks book it's one I had on my wish list  and bought for myself ( it couldn't be ordered from the library or I would have). It's called  Unstoppable by Nick Vujicic, such an amazing person, I am half way through it  already (oh lovely holidays!). 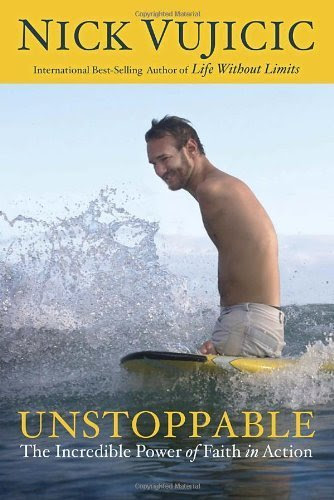 If you want to find out more about Nick you can do so here, there are also videos of him surfing (yes surfing! that cover photo is real.) with Bethany Hamilton who lost her arm to a shark in 2003 another inspirational person. If you haven't seen the film Soul Surfer I suggest you watch it, but you will probably cry ( I did).
There are some amazing people out there doing incredible things, try and remember that when the evening news shows you all negative stuff that's happening.

I've been doing a bit of baking today I have thought  recently that I would like to make more of the snacks the children eat rather than buy cereal bars for packed lunches that are full of rubbish, but also making bread. I don't think this would be all our bread as we get through a lot and I wouldn't be able to keep up but at least make some of it.  My husband picked up a bread maker one week but I told him to put it back, bulky to store and well it would feel like cheating.  So while I was browsing last night I came across  Pitta bread recipe on BBC food website by Paul Hollywood and decided I would try these today.  The recipe says strong flour but being impatient and not having any I just used plain white, but hey they came out lovely.  Here is the picture from the website as most of mine have been eaten already (good sign) they were maybe not quite as regular in shape but very similar and tasted fab. 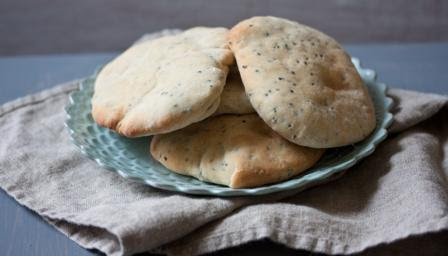 I will have to remember to take photos before devouring the baking next time. I loved watching the Great British bake off when it was on and was super impressed with some of the fantastic stuff made on the show, so I will continue to try and improve my own skills but don't be expecting any three tier cakes, it won't be happening.
So that is going to be my resolution number one, to bake some bread every week.
I also made some white bean dip (humous) to go with it also from the same website here. I  don't know why I haven't made this before as it is so easy and you just put it all in the blender and add the oil until it is the right consistency. You can also adjust quantities of salt or juice etc. to suit your own taste so this has to be better. I used lime instead of lemon juice as I always have limes in the fridge and it tastes good.  I worked it out and as I  used canned cannellini beans  the cost of making it is less than half what I pay at the supermarket. You could use dried beans which are even cheaper but then you have to boil them for such a long time you have to factor in the cost of gas or electric so I think canned ones are just as cheap.
Tomorrow I'm making flapjack then I'm going to portion it and put it in the freezer so  I can just take it out to put in lunch boxes.
I've also found a really interesting blog called The Prudent Homemaker there are lots of money saving ideas on there but some of them are extreme and it is an American site so lots of links to U.S codes and business sites.  The mum who owns this blog must literally never sit still, she has about seven children ( home -schooled)  grows most of their fruit and veg, makes most of the family's gifts and clothes,  cans preserves, gives talks. Wow! She plays it down a little by saying she is home all day and doesn't go out to work but I say she does work as she is educating and caring for all those children while making the best of what they have.
My next resolution is not to drink any alcohol in 2014 and if I do that it might become ever.  I don't have much but I will buy wine sometimes when we go shopping once a week, quite often I get it home and its not even very good. So I won't be buying any. I will have to inform family of this as if my mum goes away she will sometimes bring me some back as a gift.
Resolution number three is to choose my attitude and make it positive and not let others negativity spoil my day.  I have been reading a really good book this past few weeks called  The Power of Positive thinking by Norman Vincent Peale and it has really made me think how much time I have wasted  worrying over pointless things. 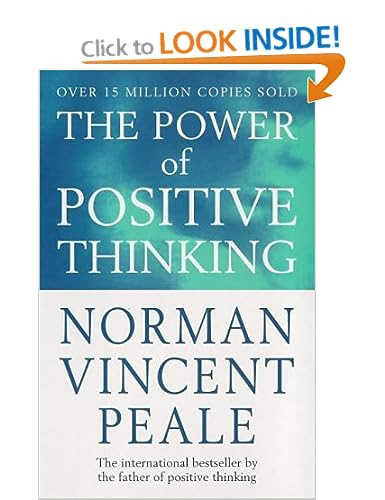 Number four is to do more exercise I already swim and walk the dogs but I'm going to aim to do something ever day.  Now I have two x box games which are fitness and dance central so I can do those,  also the dogs need walking but I can only count this if it is a substantial walk ( but I do walk fast)  I swim twice a week as I have membership and I also have a pilates work out on the laptop so no excuses really not to do anything.
Number five is to read a book a week,  I have perhaps watched too much T.V this year I checked my Goodreads list and found I had only added 15 this year well that is a bit rubbish.
So there we have five that I can stick at, and two of them my friends can pull me up on if they catch me complaining or drinking!

Lovely lazy Christmas and a bit of sewing

I'm having a lovely time enjoying the Christmas break and I hope you are too. I haven't been anywhere much just out with the dogs but I did get to go and have lunch with my two lovely friends today so that was good and  a reminder from one that I haven't posted recently so here I am.  Now that I have recharged a bit by being away from work I have done a bit of sewing, I started this patchwork cushion this morning and I have just finished it when I got back from my outing.  It is a central square and then you just keep adding a rectangle as you go around, I literally just cut the fabric as I went along and used lots of prints.  I'm sure the patchwork experts will be saying no that is not how you do it you are supposed to plan and see what colours go where etc. Well I like the cushions to look a bit wild so never mind. 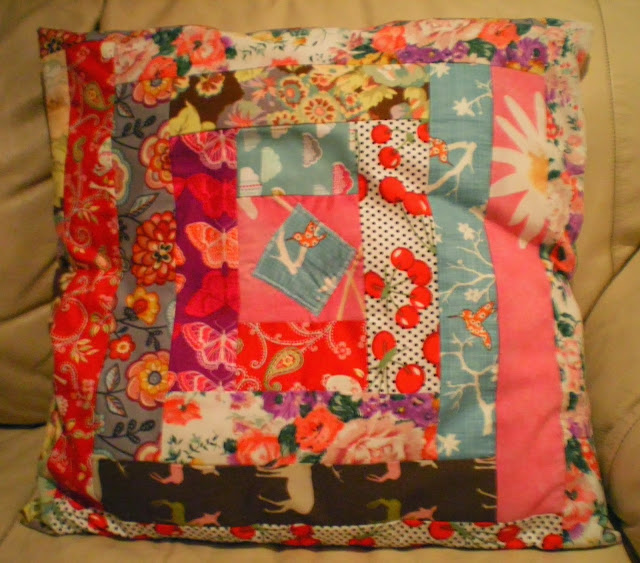 I've realised since I finished it that the deer fabric I used near the bottom has resulted in all the deer having their heads missing, whoops! I like the riot of colour any way.  I first saw a cushion similar to this a few weeks ago on this blog  attic 24 Lucy does mainly crocheting but she had done a post on colourful cushions so if anyone out there knows if there is a name for the design on my cushion let me know.
Also read some fabulous craft books while I've been off all from the Tilda series. 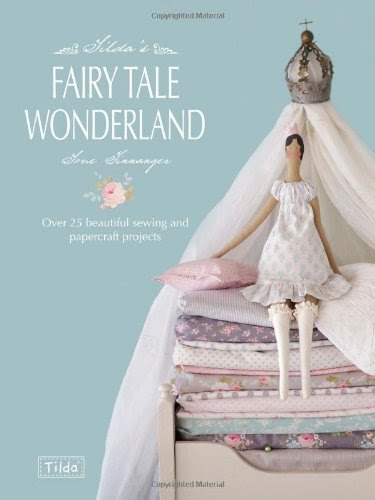 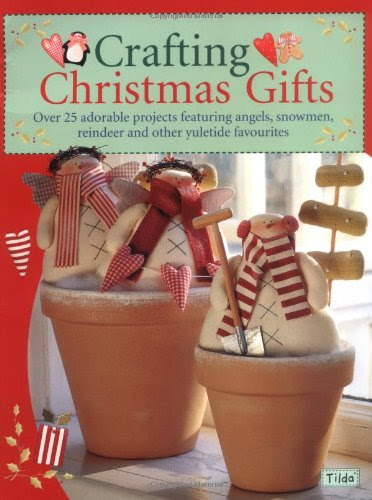 I think the fairy tale wonderland was my favourite although some of the figures and creatures look very intricate to make, they do come with patterns but my books were from the library so I wont be using those, but good inspiration and gave me a few ideas for themes I may make things around.
I also made today a make-up bag/ clutch purse for my Folksy shop  I used the cherry vintage fabric again wow that stuff is lasting to say it was a piece left from a dress.  I thought I might make a few of these and see if they get any interest. 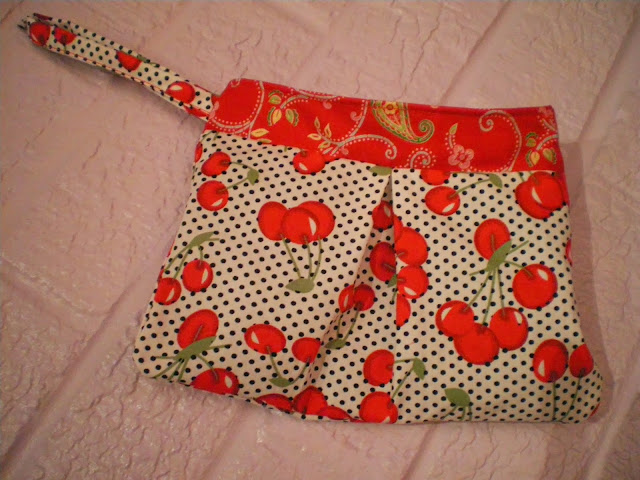 It is lined and has a zip so I suppose it could be used as a small bag to hang from your wrist. I have a full week left so I will crack on and be sure to make more.
Also having ideas about making dolls so hopefully will have something to show on that front soon. Right I'm off to list that make-up bag on folksy then a cup of tea and my book. Have a lovely Christmas and I will leave you with this image of my tree. 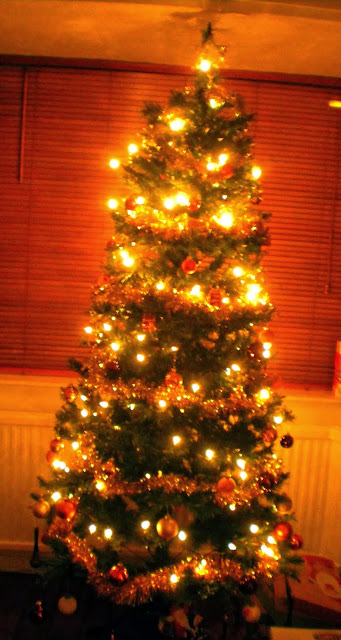 Hello I hope you all had a good weekend, I managed to get back to the machine to make my jumpsuit and I have to say that halfway through I w... 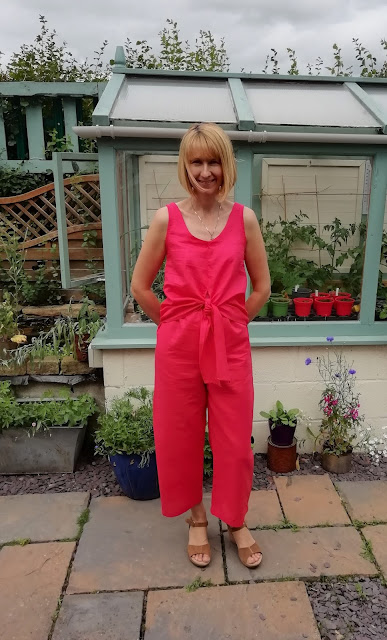 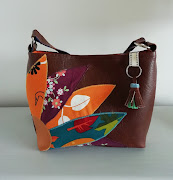 sewing green lady
Sheffield, United Kingdom
I live in Sheffield with my husband, two children and three small dogs. I like to sew and create whenever I can from recycled materials.